This project is nontraditional in the sense that our client is actually a specific community, as well as those we partnered with to produce public art installations around the city of Sacramento and through the Crocker Art Museum.

When the Crocker Art Museum came to Activism Articulated and asked for our assistance in bringing “new blood” to their ArtMix events, we chose to answer the call by utilizing local artists to recreate an ongoing small-scale project as a giant one. 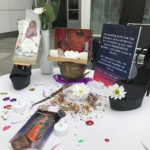 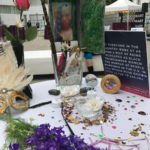 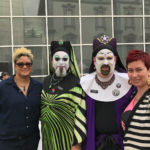 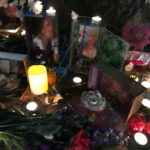 Justice Altars, draws attention to violence in marginalized communities and honors the lives of those lost to this violence. For this project, the team chose to focus on the lives of transgender women of color who were murdered in 2017, including a local woman whose family was involved in the project. The collaborative piece was conceived as an interactive community art project that would bring a street altar into gallery space, constructed on site at the Crocker museum, then deconstructed and reconfigured as a public street altar in one day. A range of community partners were involved and the entire budget for the project was less than $500.00.

We structured this project around the idea of bringing street art altars which are a common way for marginalized communities to process their grief, into a predominantly white, privileged space as a way to raise awareness and promote empathy for an often-invisible community. We were careful to include the second part of the project which was to dismantle the project and bring it back to the street, it’s place of origin both figuratively and literally, to be experienced by Sacramento’s queer communities who may not have had access to the event. The altar was focused on honoring and celebrating the lives of the women we lost, highlighting the inherent violence of erasure in the ways that they were written about in the press after their deaths. We followed up with a focus on family and the ways in which we are connection, creating a sense of place and home for those often cast out. We highlighted this additional theme by combining elements of the past, present, and the future and focused on visibility, empowerment, strength and healing. Seven Trans Women of Color were murdered in the United States within the first two months of 2017. It felt only fitting that our priority should be to collaborate with organizations that could do justice to them. For such a task, we first looked to the underground queer artist communities of Sacramento. The House of Amazon was our primary partner in addition to the Crocker Art Museum. It is comprised of 20+ social justice focused artists who look to Vogueing and ball culture for inspiration. This was a culture that was made popular in the early 90’s by such mainstream artists as Madonna, and provided a level of visibility for queer and trans people of color.

The House of Amazon pays homage to this incredible art form by incorporating the “House” aesthetic throughout the artist collective that encompasses the heart of this queer cultural artifact, in the heart of South Sacramento.

We also collaborated with the online spiritual community Social Justice as a Spiritual Practice (SJSP) to assist in making a sacred space within public locations that would educate and honor while also amplifying, celebrating and honoring Trans women of color who lost their lives due to unnecessary violence. We felt SJSP, known in the Sacramento community for their Justice Altar Initiative, which was designed as a response to police killings of people of color, was a natural fit. Several members of Activism Articulated belong to both groups and the thread that drew the project together was the building of an idea around contributions by all parties that dovetailed with existing interests. The altar was a mixed media project, including digital projection, painting and graphic design, sculpture, constructed objects, fashion, performance, and floral arrangements. It also brought together various religious groups and practices in one single effort that was both educational and a method of strengthening solidarity between highly disparate groups.

The project was pre-built for three months under Activism Articulated’s supervision and project management before being installed at the Crocker Art Museum. At the end of the event, the project was dismantled with the help of partners and rebuilt on a street corner in Sacramento’s Lavender Heights district, ensuring that it was accessible to the queer community as well as the arts community.

For three months, Activism Articulated spearheaded the direction of Justice Altar portion of the Crocker Pride event. We handled organization, art direction, project management, partnership relations and community outreach. We created art, brought in volunteers, worked with multiple communities and the family of one of the women we honored, making space for their voices and input. We handled PR and advertising for the event as well as overseeing construction, deconstruction and reconstruction efforts. The project was documented and is available to be revisited in other spaces in other ways. We plan to make this an ongoing event effort with additional partners throughout the Sacramento area several times a year.